Journey of a Lifetime for Saint Paul Resident 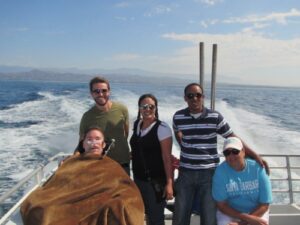 It all started with a conversation over a cup of coffee.  A young resident of a Denver nursing home mentioned to a staff member that he had never seen the ocean.  Nick had been admitted to Saint Paul Health Center ten years ago, at the age of eighteen, and wondered if it would be possible in his lifetime.

Thus began a fundraising campaign and elaborate logistical planning to make sure that Nick dipped his feet in the Pacific Ocean.  Adam Fyler, the Activities Director at Saint Paul, set up a crowd-funding page and received significant support from the South City Park neighborhood of Denver and relatives of other residents.

It became clear that flying was not an option.  Too much medical equipment was involved.  Nick would travel, by bus, with Adam, a nurse and a nurses’ assistant, his mother, and another resident, Karla.

The travelers departed on August 6th from Denver, weaving their way through the southwest, seeing Moab, the Grand Canyon, and the Hoover Dam along their way to Santa Barbara, where they had rented a large house a few miles from the beach.  On Monday, the 11th, in a special wheelchair with large wheels that could navigate the sands of the beach, Nick encountered the Pacific.  It was an inspiring day for everyone involved in the journey.  The following day, on a sea cruise, the travelers viewed dolphins and sea lions.

At the age of 28, Nick took the trip of a lifetime.  What was not understood when planning began over that cup of coffee earlier this year, is that this journey would come to affect so many neighbors, families and staff members along the way.

The group’s travel blog can be found here:   https://www.travelblog.org/Bloggers/st-paul-road-trip/

The crowd-funding campaign can be found here:  https://www.indiegogo.com/projects/st-paul-health-center-s-trip-to-california

We are passionate about serving our residents and their families in a unique intersection of hospitality, wellness and healthcare.  Imagine the positive difference you can make each day on a senior’s life.